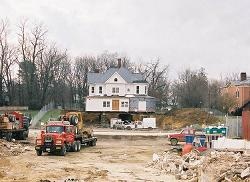 In March 2002, a 400-space parking garage and retail development called Kent Square was proposed on the site of one of the Town's original "Sixteen Squares.” The Alexander Black House was also located on the site. The development was envisioned by the Downtown Master Plan, the town's Economic Development Plan, and the 2001 Comprehensive Plan, each of which recognizes the value of the character of the downtown while noting a significant need for parking and retail development.

In agreement with the developer, Blacksburg allocated $2 million toward the parking garage, and one month later approved the purchase of the historic Alexander Black House. The town then contracted to have the house moved to a new location on Draper Road and initiated plans to restore and preserve the historic structure. An agreement was reached under which the developer would dismantle additions and exterior alterations on the historic house, temporarily close in openings that remain after demolition, and brace the structure for relocation. The town then contracted with Expert House Movers to move the historic house across Draper Road adjacent to the Thomas Connor House. The two houses are now situated so that a plaza can be constructed between them along the Bicentennial Greenway, which crosses this property. Expert House Movers are notably recognized for their move of the Cape Hatteras Lighthouse, the largest brick lighthouse in North America.

Pictures of the Move